There is a perpetual, combative arithmetic involved in my daily life these days that I want very much to do away with. I am not terrific with math, in fact it’s probably my War On Noun nemesis, so this irks me on more levels than it might somebody else. The problem is this – with no steady income, my life, kneed in the gut by the financial collapse, becomes dictated by To-Do-Later lists. Chores that I cannot address because I do not have the money to purchase the required materials to fix the issue, like the leaky faucet that has been steadily torturing my roommate and I that I’m fairly certain only needs a washer, a wrench, and a youtube instructional video. I appreciate To-Do lists with a near institutional fondness, but my preference is for immediate problem solving, so I loathe To-Do-Later lists. They are Not My Style. If something’s wrong, if something needs to be addressed, now is always better than later. I’m well known for showing up at other people’s houses and suddenly helping rearrange the furniture, because when they drop a comment akin to, “it’s something I’ve been meaning to get around to for awhile”, I’ll jump up and suggest we tackle it right then and there. Yet my life has become a massive sinkhole of financially twisted procrastination, a stack of “when I get my first pay-cheque” balancing. Cold weather shirts versus my credit card bill versus better cat food versus winter weight curtains versus the utility bills versus a can of paint versus groceries versus the zipper on my boots versus a washer and a wrench. Never even mind my Irish passport. It has reached the point where once I do find regular, (lovely! beautiful!), ordinary employment, I suspect that my life will barely change, given that so much has piled up. So here’s the thing, given that many of you are also involved in the poverty economy, how are you managing? How do you make breathing room? 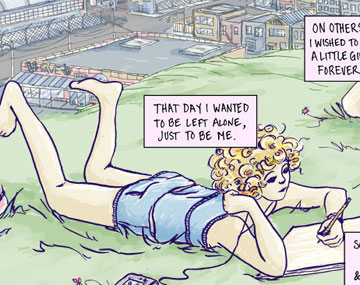 click here to start at page one
I’ve been following Busted Wonder since it started, (Charity is a sizzling sweetheart and a super fun read, you should add her), so I’m extra thrilled to finally read the story from front to back and to know, especially, finally, the why of the title. I have to admit, I’d been wondering.

The Dr. Pepper Show is back!

being a neo-victorian web-comic involved with gothic dandies, evil doctors, and girls with frilly underpants.