“Neil Harbisson introduces himself as the first cyborg ever legally recognized by any Government (2004). He was born colour-blind; so he can only see in black and white (Achromatopsia disorder). An electronic device implanted in his neck allows him to translate colours into sounds. The camera that hangs from his forehead 24/7 was accepted as part of his British passport photo. By that very fact, the camera became congenital and not prosthetic to his body anymore. Thanks to it, light frequencies are captured and translated into sound frequencies by the chip, which in turn sends them to his brain. He literally listens to colours with his electronic eye. A standard eye perceives light, tone and saturation. Harbisson’s organic eyes perceive light, but tone is converted into sound, and saturation into volume through his third eye.”

Tiny, mild hints of synesthesia have been slipping back into my life, like the waterproofed nylon pouches at work that smell like zippers running over my teeth or the barest trace of a taste being associated with a name, the way “Gavin” sometimes seems like a small white stone sitting on the center of my tongue. Though the experience is oddly natural, a far away corner of my brain fills with dread every time I notice it happening. To say I am concerned would be an understatement. Is this how it starts, the family madness? Are some six essential cells in my temporal lobe flickering in seizure? I do not know how to tell. 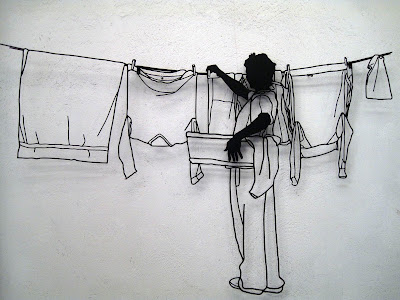 Went for lunch with a game designer stranger I met on the bus today. It was a bit odd, trying to be social through a mad haze of sleeplessness with someone I’ve never met before, but it was nice, too, to know that even when I’m this wiped out, I can introduce myself with enough panache not to be immediately written off as a vaguely hyperactive nutcase.

The last few weeks have been deliciously fun, yet exhausting and murderous. CanSec leading into the Juno’s? I’m slaughtered, especially given as nothing’s let up. My planned sleepy Sunday, for instance. Lung called at noon, and even that was too early for me to want to wake up after the crazy open bar soiree at The Lift on Saturday evening. I had to, though, to make sure I made it out to Slickety Jim’s for brunch with Emerson. I would have died all over again if I had missed that. Then, banking on an energy drink to win over my four hours sleep, Lung and I went hiking around the Twilight filming at Whytecliff park out by Horseshoe Bay until it was time to drop me off back at Kingsway and Broadway to meet with David and Pia for a bit of birthday-ing on Main before heading over to the Batcave, a dirty whirlwind, to retrieve my hostage bikini, (a failed mission), and try to relieve Dragos of the last of the CanSec supplies, (also a fail, but less so). Given the party, I don’t think I would have made it home if it weren’t for a surprise ride home from Richard, for which I am so obscenely grateful I should give him a pie, (hear that Richard, a pie! E-mail me to collect!), but even so, I don’t think I got to bed until somewhere around the vicinity of two or three.

Given my plans for the next few weeks, I suspect most days are going to feel like that. Busy as busy can be while still having fun. Somewhere in there, I have to cram in more work on getting my computer back up, sifting through photos, and spending time writing. Tonight, somehow, I don’t seem to have plans, but mercy, I am sure by the time I get home that will have changed. It doesn’t rain but it pours.

Remember that little note I e-mailed to my father right before my birthday? I forgot entirely about it until today. There are, so far, four replies.

To refresh your memory, here is what happened last time.

So that one letter pretty much re-caps the general themes of the last batch – the corrupt and evil government that is out to kill him is working in collusion with my vindictive mother to brainwash me and destroy my talents. It’s evident that he hasn’t gotten any medical attention. He is still, yes, bonkers.

Sarina was my step-mother for a brief period of time when I was little. She hooked up with my parents and her two kids came with her. It was neat – I had siblings for the first time. This odd family unit is where Robin comes from. Sarina had one too, named Blake. Her family lives on the Island by Parksville somewhere – I sporadically try to find them. Blake would be around eighteen now? (I wonder if my dad is on his birth certificate). This means that Daniel and Brianna would be, (I think), 20 and 21, well old enough to be reasonable conversationalists.

I don’t know very much about my grandfather, except he was a jazz musician and an alcoholic. My grandmother loved him very much when they were young. (They had a ridiculous number of children, too). I don’t know if I’ve ever been to Sardis. It’s in the middle of absolutely nowhere.

My friend Blake put it best a few years ago when, over dinner in Victoria with the other One Yellow Rabbits, he kindly asked, “So when did your father fall off the edge of the world?”

And that, ladies and gentlemen, is what I’ve found in there so far. A continued obsession with my mother, her (dead? fictional?) roommate Mary, my ex-stepmother Sarina, the christian government that wants us all dead, and a very strange note on hookers, which may or may not imply my father spent time as a pimp. Rock on.

I sent a letter to my father this morning. Yes, my violent, clinically psychotic, paranoid schizophrenic father who I can only hope is now old enough to be toothless instead of terrifying. (There’s a long shot, wow). There is always a chance the e-mail will bounce back. The address I have for him is very old, from five or six years ago. Here are the results of our last correspondance, from 2004.

In truth, I don’t know why I’m sending this, given what or last communication degenerated into, but somehow I feel that 25 is one of those vaguely landmark ages, and I wanted to try to say hello again, and at least let you know I’ve made it this far.

Course, there’s always the possibility this will bounce back. This e-mail address is from a newspaper clipping from many years ago. The paper’s gone yellow and brittle, easy to tear. I’ve kept in one piece, though, not even sure how. It’s just been one of those things where every time I clean my apartment, somehow I manage not to throw it away.

I hope you do get this. It’s been a very long time. I haven’t seen you since before I was ten or spoken to you since I was twelve. I hope you are feeling better since our last letters, and have gotten some medial attention. I don’t usually recommend little coloured flakes of chemical to anyone, but there’s always new pills on the market, you know, maybe some of them will help.

At any rate, good luck in your endeavors, whatever they may be, and happy birthday to me.