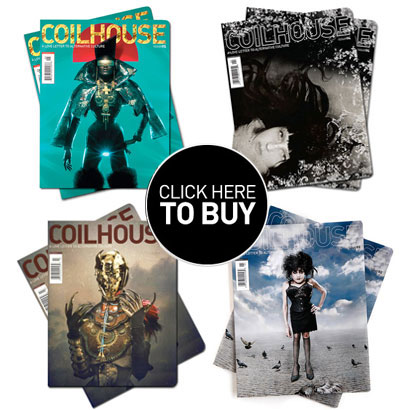 As Merideth says, “If you’ve ever missed out on buying one of the very quick-to-sell-out print editions of our magazine, now’s your chance (for a limited time) to buy a digital version on the cheap! If you’ve ever wanted to enjoy a DRM free, high resolution, portable version of Coilhouse on your e-reader, you’ll enjoy having these.” The Secret Knots displays a secretive, self referential narrative in its newest presentation, The Protaganist.

I have not been writing lately or taking pictures or doing much of anything. I have become insular, a hermit of my own home, my descriptive windows shuttered, my ability to reach out and communicate closed. I stay up late waiting for a reason to go to bed yet wake up early, worn out, grasping for a reason to stay asleep. Every day is thinner than the last.

An excerpt from Madeleine L’Engle’s A Circle of Quiet, (Crosswicks Journal, Book 1):

There have been a number of times during the past years when one of my “children” has come into the library, puttered around the bookshelves until we were alone, and then sat by my desk to talk about love: should I sleep with him? does he love me? is this girl just having me on? what do you really think about marriage? every boy you go out with expects you to make out, all the way; the girls want anything they can get out of you, but I think this one is different; how do you know if you’re pregnant? my parents don’t like her, they think she’s a tramp, but she isn’t, and I love her.

They really don’t want me to answer their questions, nor should I. If I have not already answered them ontologically, nothing I say is going to make any sense. Where I can be of use is in being willing to listen while they spread their problem out between us; they can then see it themselves in better perspective.

But over the years two questions of mine have evolved which make sense to me.

A lovely example of this is Josephine: the spring she and Alan were engaged, when she was eighteen and a sophomore at Smith, they found out that they could not possibly be apart more than two weeks at a time; either Alan would go up to Northampton, or Josephine would come down to New York. She knew that she would be getting married ten days after the close of college. And her grades went steadily up.

The other question I ask my “children” is: what about your relations with the rest of the world? It’s all right in the very beginning for you to be the only two people in the world, but after that your ability to love should become greater and greater. If you find that you love lots more people than you ever did before, then I think that you can trust this love. If you find that you need to be exclusive, that you don’t like being around other people, then I think that something may be wrong.

This doesn’t mean that two people who love each other don’t need time alone. Two people in the first glory of new love must have great waves of time in which to discover each other. But there is a kind of exclusiveness in some loves, a kind of inturning, which augurs trouble to come.

Hugh was the wiser of the two of us when we were first married. I would have been perfectly content to go off to a desert isle with him. But he saw to it that our circle was kept wide until it became natural for me, too. There is nothing that makes me happier than sitting around the dinner table and talking until the candles have burned down.

I have been wondering this summer why our love has seemed deeper, tenderer than ever before. It’s taken us twenty-five years, almost, but perhaps at last we are willing to let each other be; as we are; two diametrically opposite human beings in many ways, which has often led to storminess. But I think we are both learning not to chafe at the other’s particular isness. This is the best reason I can think of why ontology is my word for the summer.

A Russian priest, Father Anthony, told me, “To say to anyone ‘I love you’ is tantamount to saying ‘You shall live forever.'”

I am slowly beginning to learn something about immortality.

“Once a little boy sent me a charming card with a little drawing on it. I loved it. I answer all my children’s letters — sometimes very hastily — but this one I lingered over. I sent him a card and I drew a picture of a Wild Thing on it. I wrote, “Dear Jim: I loved your card.” Then I got a letter back from his mother and she said, “Jim loved your card so much he ate it.” That to me was one of the highest compliments I’ve ever received. He didn’t care that it was an original Maurice Sendak drawing or anything. He saw it, he loved it, he ate it.”

– Maurice Sendak, author of Where the Wild Things Are

The video for Will Do, a single from TV On The Radio‘s upcoming album Nine Types of Light.

“United We Rise”, by Peop1e, featuring Chaplin’s most beautiful speech.