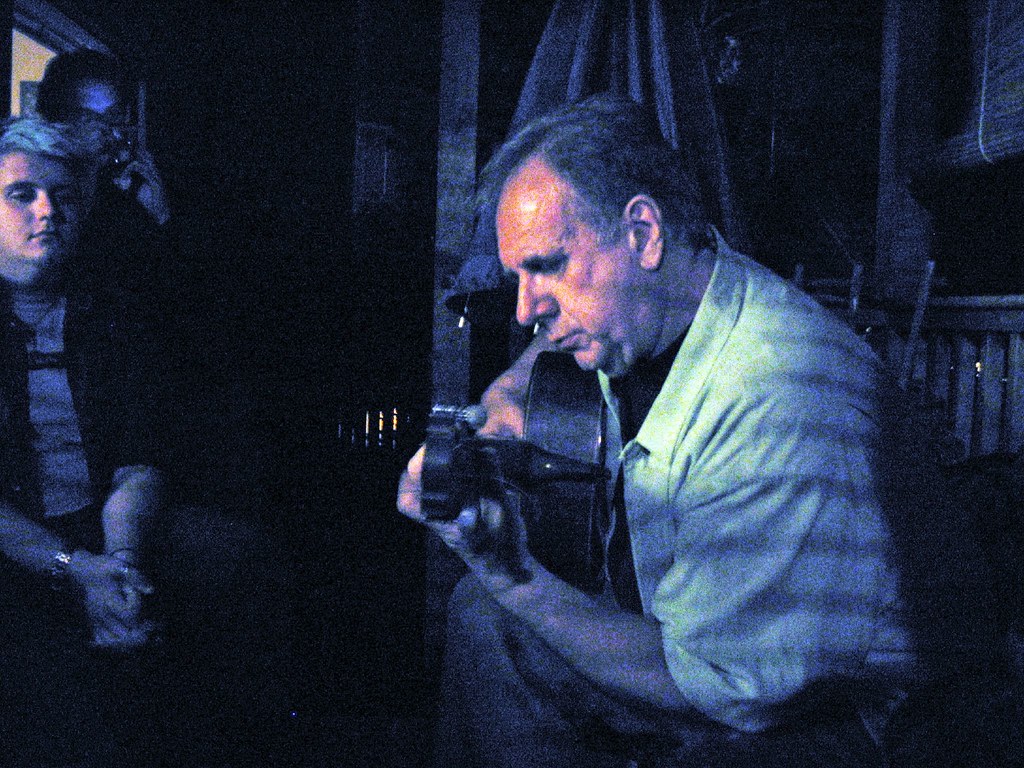 Stephen Elliott, the closest thing I ever had to an adopted father, passed away on the morning of September 1st. 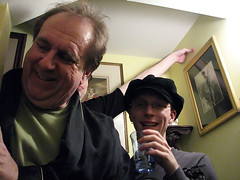 I was at Burning Man, so could not be bedside. I also missed his memorial. Yesterday would have been his 67th birthday. I do not feel guilt or regret, only grief. 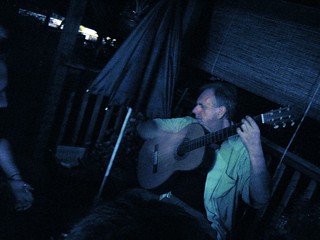 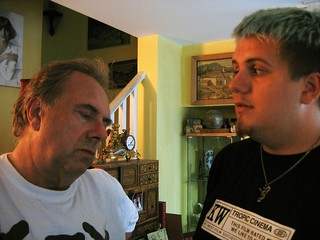 It was a privilege to know him and to receive a small part of his generosity, cleverness, and joy. Somewhere there is a video of him playing Spanish guitar at one of my birthday parties, as pictured above, but that doesn’t capture his vivaciousness or his overwhelming wonderful everything. They don’t make them like they used to. He was quality and charm and grace personified, as well as the best sort of sly English wit. I don’t know what else to say, except that he was loved, and is loved, and will always be so in my heart. My sympathies and condolences to everyone else currently grieving. He was prolific with his care, there are so many of us who will forever miss him, and we are all worse off for the loss. 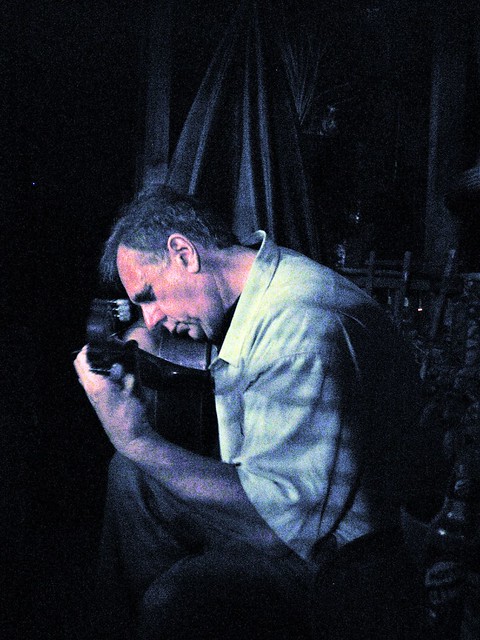 Oliver made our relationship over into a self-fulfilling prophecy. (The only person to dare claim I would ‘understand when I was older,’ he would constantly harp on my age, instead of realizing that his sheltered, unscarred perception was the emotional problem). I realized I had his number when my friend Stephen, Michael‘s father, asked after him last night. One of those well-whatever-happened-anyway questions. Tears sprang stinging to my eyes and I quietly said, “I didn’t expect him to be so faint of heart.” The instant I made my reply, the curtain sighed as it fell to the stage. I grasped the explosive charge and extinguished it with my bare hands. Stephen looked up from the ice-cream he was inspecting in time to look at me, understand, and say, “I don’t know you incredibly well, all things considered, but I do know that you’re most certainly not for the faint of heart.” The release, a statement of the obvious, as I rose out of my post-glory depression from Saturday night. (It’s terrible, how after I felt like falling down and crying. I wanted a kiss so bloody badly, some way to celebrate, some incredible smile to drown myself in, to let go of the show by unwinding out of my body around someone else. I’ve never had that, you know. No one has ever stayed long enough for me to share a victory. Not once.)

The fire and fireworks went so bloody well that I was almost amazed. It was a potential disaster of the worst sort. We almost didn’t have a finale. Those rather essential things we needed to make a show? Gone. All our fire torches, staves, etcetera, got themselves misplaced between Thursday night after dress rehearsal and when I arrived Saturday afternoon at 2 o’clock. No one could tell me a thing. I arranged search parties for hours, grasping for any clues, any ideas as to where our kit went. After I vowed vengeance several times, and condemned our ridiculously poor security to be the first against the wall when the revolution comes, we managed to borrow some odds and ends off Elliot Neck at the very last minute. Less than twenty minutes before curtain, gear finally arrived. By the time gear arrived, we’d used all our fuel filling Tiki torches. Which meant that we ended up lighting with Citronella. Yes, Citronella. That’s what the gas station had. As if to add insult to injury, the delinquent half of my crew didn’t arrive until five minutes before call. Except the arsonist, who’d been there since five in the afternoon. It was like I pulled the entire show from the air.

However, so was my show.

On a bad day I’m a once favourite plaything that someone got dirty. Now they put me back in the box once they’ve seen what they’ve done. Good days aren’t much better. Either way, he smiled when he was sleeping, and the music playing was in synch with the industrial trucks outside. I fell back unhappily dreaming to that moment, notes of piano and large crashing stares, the threatening movement of birds in the sky.

Thank you Ed for the benediction of tasty dead animals. I was scared to look in the fridge yesterday, for fear that you had brought me half a cow or something.

HOW TO DESTROY THE EARTH.

It was brought to my attention that I have spectacularly failed to mention that Stephen and I went to the Vancouver Folk Fest last Sunday. Every year for the past seven years, someone has lavishly offered me passes, back-stage, performer, and otherwise. This year it was DK and this year, finally, I not only remembered in time, I had a day free. We met him at the western gate, the one in the middle of the ethnic village of white plastic open tents selling bamboo/hemp/100% pure free-range cotton hippie fabrics, flashing peace-sign LED pins, the essential and required plethora of hand drums, and east indian/african clothing richer than oxygen with colour and glittering threads. The passes he gave us were top of the food chain. Floating through the crowd, we’d come too late for anything but main stage, so we left DK to continue to the other gate and forked off to find food. We had the option of eating backstage with the performers and volunteers, but felt too guilty. Almost everyone else with a CREW pass worked for it, even if only a little. (We missed the super secret little mecca the crew had assembled behind the Tool Tent, complete with an immaculately balanced fooz-ball table and twenty foot hammock, until everything had wrapped, the more fool we.)

The hot sun made shade prime real estate, so we found some and sat in it while the band that first inspired Bob Dylan took the stage and explained to us with instruments and voices stronger than bombs, in very precise detail, the definition of American folk music. Deciding that Mr. Dylan was made of sterner stuff than I, as the banjos on stage continued to proceed with an overwrought dignity, I got up and walked about, taking messy pictures of the crowd, and successfully tested the efficacy of my special guest pass by half-climbing the sound tower without being questioned. I ran into a few people I used to work with who’s names I wouldn’t be able to remember if you put a gun to my head, who asked me details on stripping down a side stage tent, until I decided it would be simplest to vanish back to where Stephen was dozing with my bag.

The steady swell of applause broke us and we fled backstage, cutting through to the food tents again. This time we ran into Johnny Fuck, Andrew, who was in charge of the Lantern Parade, Maureen, and the lovely Jess Hill. (If you’ve never been to one of her shows, know it’s higher on my recommendations-of-things-to-do-in-Vancouver list). It was a little like Commercial Drive had moved over six neighborhoods and had comfortably settled in for the night to volunteer. Everywhere there were long ragged skirts, smiling kids with dreadlocks, and people wearing chunky stone jewelry. Middle-aged children still carrying the light for the next generation.

All Your Snakes Are Belong To Us!

I had left my jacket in the car, thinking ahead but not all at once. It sounded like some kick-ass music was happening, grooves thicker than industry, as we walked out of the festival, across the bunny fields of Jericho, past the Drum circle, to the impromptu grass parking lot where we had abandoned the car. I was sorry to miss it, as it sounded like it just continued to get better as we came back, but I felt like I wanted to give the market a try, so we wasted half an hour poking at baskets full of five dollar five-wash shirts and tough twists of fiber-femo necklace, and by the time we were back on site, everyone was packing up in preparation for Jane Siberry’s last dance.

Sunday was Jane Siberry’s last concert as Jane Siberry, as she’s now changed her name to Issa, which means Peace in some romantic sounding language I doubt she speaks. Don’t get me wrong, the ethics she runs her website with are astounding and wonderful, (all of her songs are available as plain MP3s, which means they will play on your computer/iPod and are not loaded with DRM restrictions, and you pay whatever you like for them.), but over the years her music has been stretching thinner, until she stood on stage and asked us why there were roosters in Vancouver as clips of them played overlaid on the sound of running water. Stephen and I sat at the very front, settled with our backs against the fence that keeps the audience from the stage, and I laughed when I realized just how many of the nervous looking volunteers they dragged on stage were familiar faces.

He left before the afterparty, which turned out to be magical. Walking in, the music hit DK and I like fire sucking oxygen from the air. Ganga Giri was on stage, playing like it was the last time they would ever get to funk out. It was pathogenic. All our free will vanished, replaced by the contagious urge to dance. Outside was just as good, an open space dotted with clusters of folk fest performers jamming together under scarlet tiki torches. In one corner, a man was quietly teaching people to throat sing, and in another there was a fiddle circle that went on for at least two hours. Absolutely fabulous. I told DK that on particularly frustrating nights at home, I think to myself “there is a party just like this, somewhere out in Vancouver tonight, and I don’t know about it.” He laughed, answered, “Isn’t it great?” and we hugged, knowing it was true. There was nowhere more In than that place. It felt like home.