Don’t be the last kid on your block to know about the International Talk Like A Pirate Day Flashmob!

Arrr Sea Battle will be at Grandview Park on Commercial Drive! The time of attack will be 4:30!

Avast ye hearties, ’tis the day of piratanical reckoning this upcoming Tuesday, September 19th! In celebration of the scourge of the bonny ocean, ye scurvy curs are expected to stand proudly as pirates and brandish yer grimy cardboard swords for a battle of grate proportion.

Make yer own ship, parrot or wench to kidnap!

Remember, you are rogues! Privateers!

Don’t dance the hempen jig, but plunder in the park, hornswaggle the landlubbers and win the day!

GROG AND SHANTIES AFTER AT EL COCAL, SIX PEE EM. The Fountain, by the way, directed by Darren Aronofsky, (Pi, Requiem for a Dream), opens here as part of the Vancouver International Film Festival on Wednesday, October 11th. Tickets are only $9.50, so you have no excuse not to go. I will be attending even if I have to roll pennies off the street to pay for my ticket. 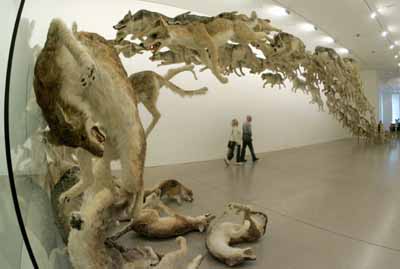 Head On, one part of a three-part installation by Cai Guo-Qiang commisioned by the Deutsche Bank Collection in Berlin, consists of 99 life-sized wolves made over a period of six months out of sheepskin, straw, and other such materials, crashing into a wall of glass. thank you Andrew.

Penn and Teller in Bullshit! take on PETA. thank you Vicky.

Today Ryan sent me a letter from work:

“I think that the word ‘Amputee’ should be amended to ‘Amputeer’ in the English language. Amputeer is a much better word. It implies the sort of person who would consider keeping there taxiderm’ed limb in an umbrella stand, and I fell that this is a behaviour that should be encouraged.”

I think he’s onto something. I miss my taxidermy. I haven’t done any work on it since I’ve been unemployed, feeling somehow like time spent polishing bones is time taken away from my job hunt, that pleasurable or relaxing activities aren’t productive ones and that until I find myself a reliable pay-cheque, I don’t deserve to affix wings onto mink.

People are just monkeys who worry. thank you Stephen.