Crossposted from COILHOUSE, as Posted by Meredith Yayanos on March 4th, 2009: 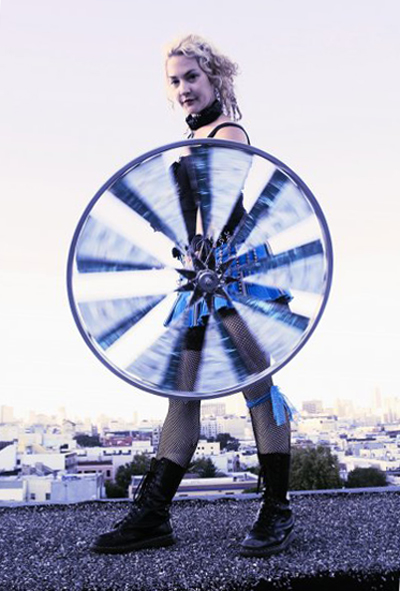 There’s this awesome, beautiful gal I kinda sorta barely know through our many mutual circus friends here in the bay area; her name is Hollis Hawthorne. She’s a founding member of a cycling dance troupe called The Derailleurs, a fabulous velocipede-inspired dance team active in a bunch of bay area-based critical mass stuff. Their goal:

To educate and entertain audiences with the possibilities of alternative transportation. Our performances embrace critical inquiry that reaches beyond conventional thought and action. We promote radical self reliance and mine local talents to unearth their strength.

They’re wonderful and vibrant folks leading adventurous lives who are trying to affect some sort of positive change in their community. They smile and laugh a lot; they are very shiny people. To be honest, I rather envy them, most days. But not today:

Late last month, Hollis was traveling by motor scooter in Pondicherry, Tamil Nadu, India when something terrible happened. Some sort of freak hit-and-run accident that wasn’t her fault left her bleeding out on the side of the road with her boyfriend Harrison frantically performing CPR for 20 minutes before a van of German tourists picked them up and drove them to a hospital. According to her best pal Eliza, Hollis was wearing her helmet and driving very slowly at the time of the accident. I’ll spare you the gory details, but it sounds very bad. Now she’s in a coma in a rural hospital with a serious brain stem injury. (You know, that part of the brain that controls, um, everything?)

According to Harrison, who has been with her from the moment it happened, “there are huge rats scurrying around on the [hospital] floor. I am sleeping on the ant-covered floor outside her room as I am not allowed in and the water they have used for many procedures is not even purified.” When Hollis’ mom flew in from Tennessee a couple of days ago with emergency support from the US consulate to see her own daughter, the orderlies were dismissive and curt. “They are not observing her brain pressure and have done nothing to alleviate the swelling in her brain. These are things that can make or break her early on in her recovery and healing process.”

Through a series of fortuitous connections, Hollis’s case has been reviewed and accepted by Stanford Medical; one of the best hospitals in the world. As a charity case, even. (Just like me and most other starving artsy fartsies I know, Hollis has no insurance.) All we need to do is get her there. The friends and family of Hollis are reaching to everyone they can to raise funds to get her on an I.C.U. plane (aka air ambulance) to fly her back to California.

This is truly a matter of life and death. They need move her quickly as possible.

Before that can happen, Friends of Hollis must raise $150,000 dollars. They’ve already raised approximately $40,000. Can you spare a dollar, or five, or ten?

Yes, I know, life is risk, and life is uncertain. Life is also precious. If we can help someone in our community to come back from the brink, in some small way, we really should. Click here to help.

Robert Anton Wilson, god-genius, the “novelist, essayist, philosopher, psychologist, futurologist, anarchist, and conspiracy theory researcher” author of the Illuminati Trilogy, Operation Mindfuck, and most of what you’re ever going to find on Discordianism, is in serious need of some help

Basically he’s “dying at his home from post polio syndrome. He has enough money for next months rent and after that, will be unable to pay. He cannot walk, has a hard time talking and swallowing, is extremely frail and needs full time care that is being provided by several friends-fans-volunteers and family. We appeal to you to help financially for the next few months to let him die at his home in peace.”

Any donations can be made to Bob directly to the Paypal account olgaceline@gmail.com.

Apart from donating directly to RAW via Paypal, the guys at Giant Robot Printing have this excellent T-Shirt for sale, from which $10 goes to aid RAW.

BoingBoing has an update: “this morning Bob’s daughter showed up at his house in tears because she had checked his PayPal account and found money for next month’s rent plus more. Bob called me to say that he couldn’t believe people would care so much about him and as we talked (which isn’t easy for him at this point) he was overcome with emotion more than once. He is so touched and RELIEVED at the possibility of staying in his home. He kept repeating to me his deep felt appreciation and disbelief that people would care so much about him. What a humble and sweet man.”

I say send what you can anyway. He’s been such an intelligent boon to our culture that there should be a saintday’s in his name, marking him as consort to his beloved Eris simply for his dedication to sharply questioning assumptions made by far too many people. Since I have some time on my hands I thought I’d like to try an experiment in broadcasting, offering some of my posts as sound files.

In the interest of maintaining my addiction to a warm place to sleep, they’re not going to be free. Instead, I’m offering them on a by donation basis.
(The donation button will ask you which post you would like a recording of.)