Via ArtNews.com: “Dan Hernandez’s gilded faux-frescoes at Kim Foster Gallery might help jog your memory. In them, genres from the recent and distant past collide with surprising ease—the mixed-media works recall Renaissance and Byzantine art and vintage video games in equal parts.” 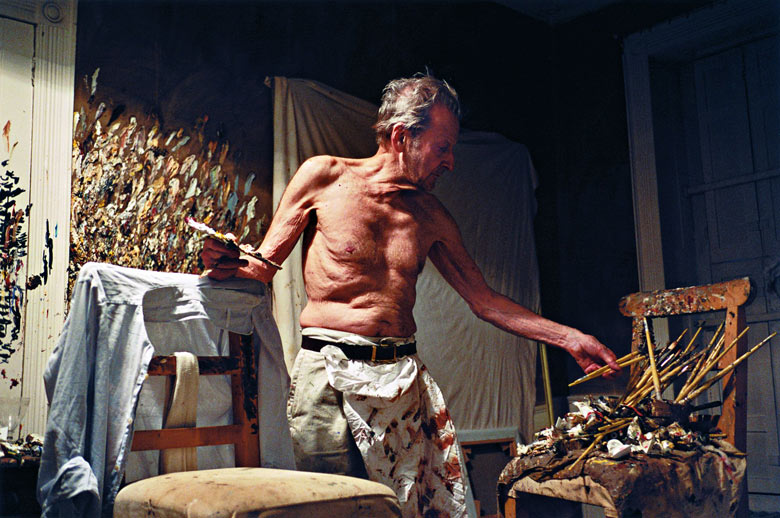 Lucian Freud, Working at Night, 2005, a photograph by his long-time assistant, David Dawson.

Stayed up two nights in a row, not for any other reason except that I have, and maybe a little that I find it more and more difficult to sleep without Tony.

Earlier, across the street at the auto body shop, someone was using an overhead announcement system to have a speaker phone conversation in arabic. Without context, it sounded like a rehearsal run recording of a middle-east political rally speech, the sort blared from speakers mounted on the roof of a car, blues brothers style, solid, unexpected, surreal.

I liked it. Over here, at my apartment, I’ve been moving furniture while listening to electronic klezmer jazz, shifting everything out of my room, stripping the walls, preparing it for painting. Most of the furniture’s been moved, and all that’s left is my computer and the bed, the latter of which I am simply going to pull into the center of the room and abandon under a sheet. Initially my plan was to ready the bedroom, leave town, then paint it when I got back, after all the pesky cat hair had settled, but Nicole, bless her, stepped in today with some last minute corrections. Sure, ready the room, but don’t pick up a paint brush, she said. Instead, she’ll paint it for my birthday while I’m out of town! Leaving me only with the hard task duties of being glad, grateful, and moving everything back in.

I was pleasantly surprised when she suggested it though truthfully I felt immediately stupid that I didn’t see it coming. After all, it’s a sweet gesture. Sweet, thoughtful, and entirely within character, considering the trail of super improved apartments she’s littered behind her or the recent threats to professionally power-wash Wayne’s deck, the better to complement the flower gardens she’s been inflicting plant by tiny plant on his jungle-neglected yard. Nicole is many nice things, smart, attractive, witty, and fun, but when it comes to home improvement, she is also a dedicated angel with a fiery sword. Or, as in this case, a sopping wet paintbrush, out to murder some beige.

Also of note are her pieces Cracked Canyon, Bierstadt with Hole, Unearthed, and Rothko Sunset, and her exhibition Seascape. Burrow being helped to walk at Dress Up & Bowl 2008

Karen and Par bring parenting to the best level:
P: So I’m ready to go out now, to get your Honey Bunches of Goats.
J: No! Honey Bunches of Oats! (exasperated sigh) Do I have to write it down for you?

The painting we started is finally finished, a week after it should have been. Hallelujah. It’s not all finished, of course, but the walls we started have been done and that’s all we really need for now. Our home improvements have been all one step at a time, one per pay-cheque, and now the Great Reddening has been accomplished, we can proceed with another two weeks of uninterrupted unpacking and sorting and shuffling things about.

(Until the next pay period episode of fix: a Weekend of Wallpaper! *music sting*)

Already the difference is immense. The endless bookcases have been dragged out of the hall and installed, clearing a definitive walking space, and some of the towering stacks of boxes have become rows upon rows of colourful, interesting books, engaging and pretty and, more importantly, shelved. Two of the mirrors have been put up, framing the still curtainless window where plants are now living, draped cheerfully over David’s giant, smiling terracotta Buddha, the futon is bookended by soft, paper lamps, and my old chest of drawers, the 100 year old vanity, has found a new home in the livingroom, transformed into an entertainment center, as we fill it with our DVD’s.

There are still boxes and clutter everywhere, but we’re limping along, and it’s getting better every day, though we took some breaks we took this weekend. Saturday, after a trip to IKEA with Ray, Nicole, and her new roommate Trevor, we went to the closing night of The Velvet Edge, the period gothic-horror Lovecraft play Duncan and Erin were in, and on Sunday we took two new friends from Portland out on the town for a best-of-Vancouver tour, (the Naam, Zulu Records, True Confections), before throwing our backs into it again.

Today our Portland friends are coming over around 6:30 for tea and a movie, (feel free to join us), so we’re not likely to get a lot done, but I think taking an evening to just appreciate what we’ve accomplished will be exactly the sort of treat we need. Almost all of our attention has been given over to figuring out where to put pots and pans and what cupboard should hold what that we haven’t had a lot of time to be social. It’s about time we have people over. I’d hate to imagine what would happen otherwise. Terrifying atrophy. An inability to go out in sunlight. Possibly even pointy teeth. Today we’re going to be painting more, this time a sweet strawberry daiquiri colour, rather than warm pumpkin orange. (Nicole single-handedly finished the orange last night.) By tomorrow the room will be ready enough for us to move the bookshelves back in and begin unpacking the library out of the improbably towering stacks of relentless boxes.

We’re finishing the the kitchen the same colour tonight, too, which makes me powerfully glad. I’ve had a paint chip tacked to the wall for months, constantly reminding me of just how much stuff is always on my To-Do list. Having two big things swiped off in the same twenty-four hours will feel like a minor miracle.

Of course, now that the painting’s almost finished, I’m starting to look harder at putting my wallpaper up. I bought a wallpaper installation kit at Home Depot when Ray and I were there last night buying paint. All I need now is a packet of glue, some good internet instructions, and a steady-handed Saturday.

An A Cappella Tribute to John Williams. ANACHROTECHNOFETISHISM: artifacts by pioneers of american steampunk.
“Long before the age of the internet, and well before the cold efficiency of the assembly line, existed fantastic and terrible machines, run on hope, sweat, and steam.
It was a time in which form and function lived in sin, and everyman was a revolutionary.

We are 13 American artists united by broad geography and narrow aesthetic.

Marrying narrative and nostalgia to design and technology, we imagine the triumphs of the past overriding the failures of the present to create from the ruins and detritus a dazzling future-perfect.“
From Eliza,

“Starring me and twelve other retropostapocalypticians, including Molly Porkshanks and Jake von Slatt, this show will feature insane amounts of designer teas and chocolates, a full set of my fine art prints, and a half-dozen original oil paintings that I have never shown in public, including Shine, Rustbutton Brass, the City, Afterglow, Twilight in the Roachfields (What I Did On My Summer Vacation), and most ridiculous of all, the Vacuum Traffic Controller: a 40 x 66″ collossus that I hope will dominate the room with his deep, slightly furrowed gaze.”

::..::
She also has a second show opening this weekend in Seattle, a solo affair launching on Saturday the 13th at Lighthouse Roasters, (400 North 43rd Street), from 4pm – 7pm. “The flagship painting, an original oil on a 24 x 24″ circular board, is the Cardiographer: dark, slick, and glowing, a portrait of a ghost-muse spinning a pulse out from ectoplasm. Co-stars include brand new (as of yesterday) 12 x 12″ Flee, a silvered landscape with robot on the lam; the ever-popular Bat Smax, an extremely adorable collaboration with my partner in rape-and-pillage, Jhonen Vasquez; the complete set of original sketches for the Bee Commission (monsters, demons, and vespid whores); and a full host of fine art prints, including many that won’t be shown at the steampunk show because they simply are not steampunk. And of course, refreshments will be served. Which is really the only reason to show up to an art opening in the first place.”

And, at my gentle nudging, it’s been decided that after her coffeehouse show, we’re all going to saunter over to Toren’s The Darkest of the Hillside Thickets concert at The Funhouse, (206 5th Ave N), where they’ll be calling up non-euclidean demons with BLOODHAG, (“Our mission is to spread the gospel of Edu-Core. Bang The Head That Does Not Read. Everyone Smarter Than Everyone Else. Use Heavy Metal music to promote literacy and vice versa. General Info: BloodHag play really short Heavy Metal songs about Science Fiction authors.”) and The Keeper, (“D&Dish wizard rock. Our EP is called Twenty Sided DIE!.”). Angel is a good friend of Jake, from BLOODHAG, and she warns us, “be prepared to be pelted with Sci fi books!”